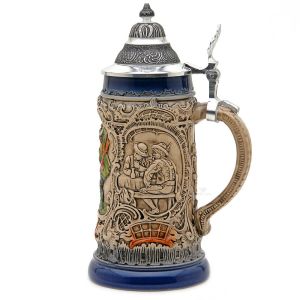 East Brookfield - Norman F. Aiken, 67, died on Monday, August 7, 2017 at St. Vincent Hosptial in Worcester, after a period of declining health over the past few months.

He leaves two daughters, Rebecca J. Millette and her husband Daniel, and Jessica L. Aiken, both of East Brookfield;  his son, Jeremy F. Aiken and his companion Jody Wheeler of East Brookfield; three grandchildren, Caleb Aiken, Michael Earl, and Marissa Sypek, and several nieces and nephews.  He was predeceased by his wife of 44 years, Barbara L. (Smart) Aiken, just last year.  He was born in Windsor, VT, son of the late Philemon A. and Lila R. (Martin) Aiken, and has lived in East Brookfield for over 35 years.

Mr. Aiken was a Department Manager at the former Fair Department Store and Aubochon Hardware for 12 years before retiring in 1990.

Norman was a loving and devoted husband, father, and grandfather - he cherished his family and his grandchildren.  He was also an avid collector of authentic beer steins.

A Funeral Service for Norman will be held Tuesday, August 15, 2017 at 2:30PM in the  Varnum Funeral Home, Inc., 43 East Main St., in West Brookfield.  A calling hour will be held prior to the service from 1:30-2:30PM in the funeral home.  In lieu of flowers, memorial donations may be made in Norman’s memory to the American Cancer Society, 30 Speen St., Framingham, MA 01701 or www.donatecancer.org.

Charitable donations may be made to: